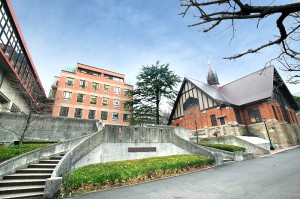 Meiji Gakuin Senior High School provides an education based on Christianity and the Bible.

Meiji Gakuin Senior High School provides an education that respects the individuality of each person.

To nurture people who can have empathy for others.

To nurture people who can be independent and self-reliant.

Mr. and Mrs. J.C. Hepburn founded an English academy in Yokohama in 1863. The Hepburn Academy, along with the Brown Academy (founded in Yokohama by S.R. Brown), had as its aim moral education based upon the Christian faith. This is the spirit of Meiji Gakuin, and this spirit has played a major role in its development. The Tokyo Government allowed the establishment of Meiji Gakuin, and its campus opened at its present location in Shirokane, Tokyo, in 1887. At the time of our foundation, Meiji Gakuin offered a General Course in secondary education. Later we evolved into a five-year middle school. After World War II, we created a 3-year middle school and 3-year senior high school. We were a school for only boys, but since 1991 Meiji Gakuin Senior High School became co-ed. Over the years we have produced many graduates, and we will mark the 150th anniversary of our foundation in 2013.